Professor Emeritus Terry Copp, director of the Laurier Centre for Military Strategic and Disarmament Studies presents “The Dieppe Raid: A Decision-Making Exercise – Part 2: Operation Jubilee.” This lecture, which explores Operation Jubilee – the raid on Dieppe  – is the second in a series of two videos which will make up this decision-making exercise. The first video (Part One) focused on Operation Rutter – the pre-cursor to the Dieppe Raid – and can be found here.

These videos, created by a team of LCMSDS staff and students, are brand new and have been recorded, edited, and uploaded specifically for this exercise. The stylistic, black-and-white films feature Terry speaking in lecture-style with visual elements like archival photographs, maps, and text, integrated to enhance your learning. 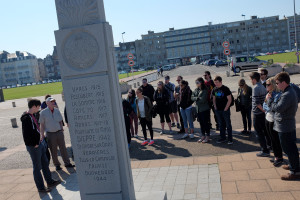 The War & Memory Study Tour, May 2013, discusses the Dieppe Raid in front of the monument to Les Fusiliers Mont-Royal. [Nick Lachance, nicklachance.com]

For more information about the study tour, consult our website, but for now let us turn to the Dieppe Raid.