The Glory and the Pity Part II by Alan McLeod

This is the second in a two-part article on the memorials of George Hill and Emanuel Hahn. We are pleased to present this series alongside our latest issue of the Journal of Canadian Military History (CMH) devoted to war art. See the current issue of CMH for more related content.

At Morrisburg, Ontario, there is another well-executed rendering of a Canadian soldier. It too is exultant: a bare-headed soldier raises his right hand in glorious victory, his mouth in mid-shout. In his left hand is a flag rent with bullet holes. This is another triumphant George Hill work, another whose message is rooted in the glory of war. 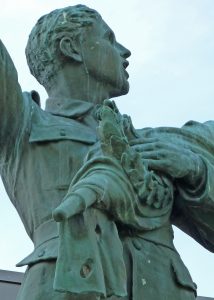 Similar Hill figures are located at Magog and Lachute, Quebec. At Lachute the triumphant soldier is again bare-headed, again his right hand raised in glorious victory, but in this case it is not a battle-worn flag on which the left hand rests but the soldier’s trusty Lee-Enfield. At Magog elements are altered – this time the raised right hand clutches a Mills bomb, the left fist is clenched – but the message is familiar: the Canadian Tommy has triumphed, he has come though, he rejoices in the thrill of victory.

At Lindsay, Ontario, another bronze soldier exhibits a different response to the consequences of war. There a soldier wearing winter greatcoat, his head downturned, right hand resting on his reversed rifle. He too is bare-headed, helmet hanging from his left wrist. This soldier is an essay not in euphoria but in quiet reflection. 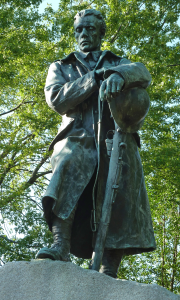 Words inscribed in war memorials across the country lead us to imagine that soldiers fought and died for ‘King and Empire’ or for exalted ideals: Liberty, Justice, Civilization. Read the accounts of soldiers themselves to find a different truth: that men’s greatest allegiance was to neither King nor Empire but to the band of brothers with whom they shared the nightmare of life at the Western Front and with whom they struggled daily merely to survive. When a soldier lost a cherished comrade to an enemy shell blast or burst of machine gun fire the effect was typically devastating. In that context it is easy to imagine what is on the mind of the deep-in-thought soldier at Lindsay.

Though it is once again unsigned by the artist, the Lindsay figure is also the work of Emanuel Hahn. Just as we never see in George Hill’s memorial figures any hint that a Canadian soldier of the Great War felt fear, or grieved, or regretted, so we look in vain at Emanuel Hahn’s work for any sign of exultation, euphoria or triumph – no suggestion that war is a glorious enterprise.

In 1918 the war poet, Wilfred Owen, wrote a preface to a volume of poems he planned to publish the following year. “This book is not about heroes,” Owen wrote, “English poetry is not yet fit to speak of them. Nor is it about deeds, or lands, nor anything about glory, honour, might, majesty, dominion, or power, except War. Above all I am not concerned with Poetry. My subject is War, and the pity of War.”

Wilfred Owen was killed in action in November 1918, just a week before the Armistice. The pity of war.

While he may not have accommodated the country’s need to weep over its ravaged generation of young men, George Hill did take pains to reinforce the view that soldiers had fought in a great cause and indeed – to use the words carved in monumental stone across the country – they had done so to the Glory of God. In some of Hill’s memorials such sentiments are made explicit. At Westmount, part of today’s greater Montreal, there is a Hill composition that leaves the viewer in no doubt which side in the Great War was held to be on the side of the angels. 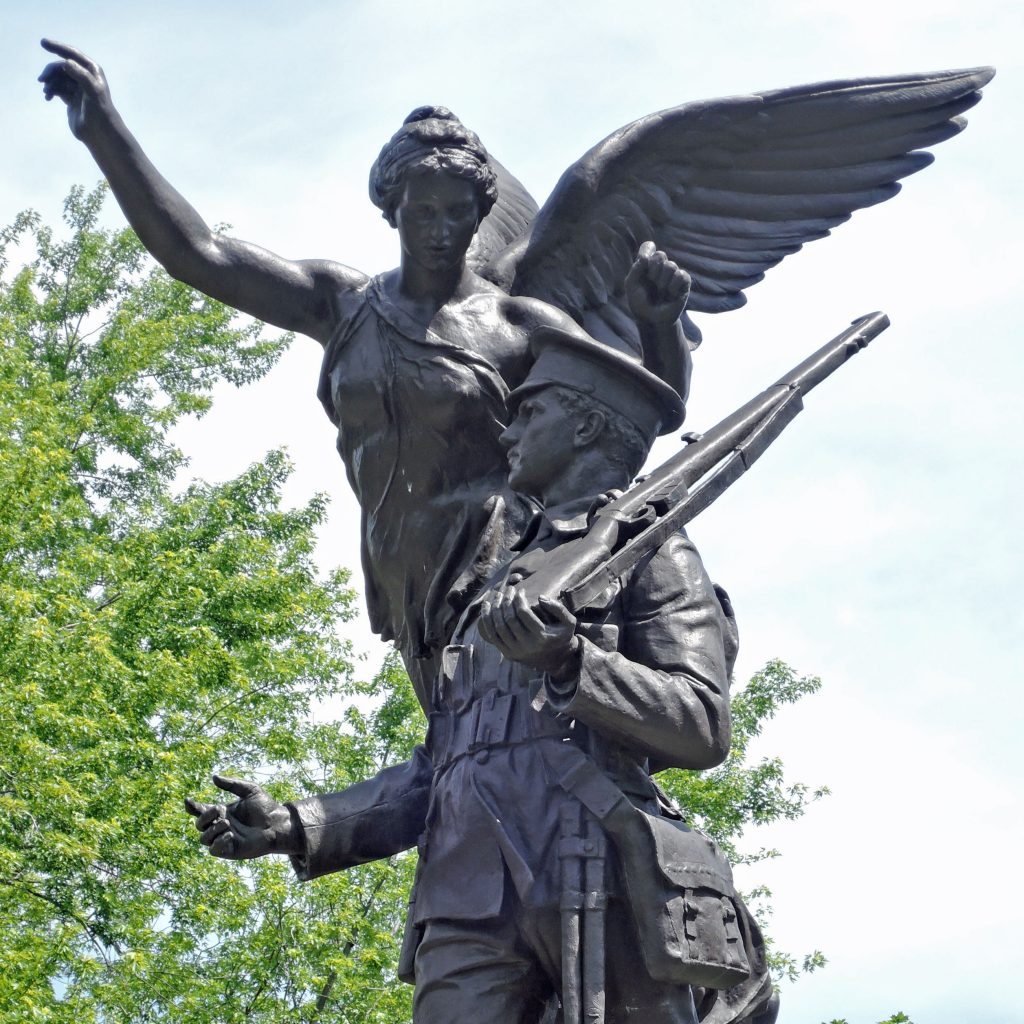 In a beautiful, centrally located, urban park there is an imposing monument “To the Men of Westmount who gave their lives in the Great War”. Like the Charlottetown monument, this impressive piece features more than a single figure. A soldier wearing battle gear, rifle in his left hand, marches forward, full of purpose and intent. He glances over his right shoulder to see the figure of a comely, womanly winged angel pointing the way to something important. A path out of harm’s way? A route to an estaminet where the soldier might find food and drink?

Only a few moments’ contemplation makes the intent of the composition plain: the angel is directing the soldier to a place where he can do glorious battle with the enemy. This Canadian soldier is on the side of the angels, the side chosen by Heaven itself. One wonders: what angel and which heaven is on the side of the German foe, each of whom goes into battle wearing a belt buckle bearing the words Gott mit uns – God with us.

Another George Hill composition, at Sherbrooke, Quebec, is even more elaborate. Again it is a grouping: in this case three soldiers, each of them looking heavenward to an angel – an angel in the same vein as Westmount’s – young, womanly, beautiful. Wings outstretched, she barely touches ground, a creature of the ether rather than of earth. In this case the angel is not so much the soldier’s guide, but their protector. She holds a laurel wreath in her right hand; the left hand is extended high over the soldiers’ heads, as in benediction. With Heaven’s help these virtuous soldiers can go about the business of dealing with the enemy without fear that harm will come to them: they are God’s warriors. 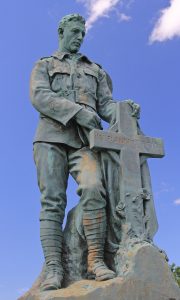 At Westville, Nova Scotia, Emanuel Hahn’s earliest memorial bronze – completed in 1921 – occupies pride of place in a patch of greenery beside the town post office. A helmetless soldier stands at a battlefield grave – a simple wooden cross – the final resting place of a comrade killed in action. Here there is no angel and no implication that someone has died to the Glory of God. The scene is rendered with a minimum of license. Here there is no exultation, no euphoria, no triumph. The scene is redolent not of the glory of war but its heartbreaking pity.

If someone coming upon the Westville monument for the first time happens to feel it is perhaps the most compelling, most moving community war memorial he has ever seen, he need not feel alone. Communities across the country decided that remembrance of their lost sons required a monument as worthy as Westville’s. Eventually there would be ten, all of Hahn’s Westville design, most far removed from Westville, all the way to Fernie, British Columbia. Only two – Westville’s and a second at Cornwall, Ontario – would be in bronze; the others are all in granite carved by master craftsman to Hahn’s design for the company that employed him as its chief monument designer, the Thomson Monument Company of Toronto.

Hahn’s Westville design was flattered not just by its popularity but by imitation too. Smaller communities without the means to pay for a Hahn original had an option: they could send off a photo of the Westville original to Italy, and have a copy made in Carrara marble at considerably less cost. There are at least as many imitations of the Westville design scattered across the land as there genuine Thomson-supplied originals. Some of the ‘counterfeits’ – at Springhill, Nova Scotia, for example, and Killarney, Manitoba – endeavour to induce the observer into thinking they are authentic. Other Italian craftsmen were less slavish about matching the original, producing copies indulging the carver’s individual taste and imagination.

Hahn’s grieving soldier was reiterated at least twenty times in Canadian communities. In some cases it was not just Tuscan stone-carvers who were influenced by the Westville design but Hahn’s fellow Canadian sculptors commissioned to produce monumental figures that would produce a similar emotional impact as the Westville original. By contrast, no memorial figure produced by George Hill ever received a second iteration. Each of Hill’s war memorial constructions is one of a kind.

George Hill and Emanuel Hahn were not the only distinguished Canadian artists producing figures for Canadian war memorials in the years following the Great War but in contemplating the breadth of their work as well as its originality and influence it is not difficult to make the case that these two were the preeminent war memorial artists of the period. No other sculptors were so faithful in serving what they saw as their duty as memorial artists: one obliged to commemorate the Canadian soldier as steadfast, fearless and resolute, the other compelled to reflect the dreadful consequences of a catastrophic war.

Neither artist had been a soldier but in the war’s aftermath each did his bit to mirror prevailing and very different attitudes toward the war and war remembrance. In his memorial figures Hill sought to celebrate the Canadian soldier as stalwart, fearless and resolute. After the war there was certainly a public appetite for Hill’s message. Those who wanted to idealize the Canadian soldier would have been entirely happy with his remarkable constructions. Who among the legions of bereaved parents wanted to imagine that the war was a pointless waste of young men’s lives?

But neither did mothers and fathers – nor wives, siblings and devoted friends –seek to obscure the fact that the war’s legacy was an abyss of loss and grief. In communities from one end of Canada to the other people still gather for Remembrance Day services around war memorials featuring Emanuel Hahn-designed and Hahn-inspired memorial figures reflecting the ethos of Wilfred Owen – and the pity of war.