One challenge in chronicling the Canadian experience on the Somme is the lack of the German war diaries, orders, and after-action reports for the units facing the Canadians. A bombing attack at the end of the Second World War destroyed the vast majority of the First World War German Army archives. Only those of the Bavarian and Württemberg formations remain intact––they were stored elsewhere––and none of these formations faced the Canadians on the Somme.[1] As a result, rarely do contemporary tactical documents survive. However, a translated, albeit inexpertly, captured order illustrates the German approach to deliberate counterattacks and enables a comparison with Canadian practices. Likely the 21st Battalion captured this order when it overran a German battalion headquarters on 15 September 1916 at the Sugar Factory. 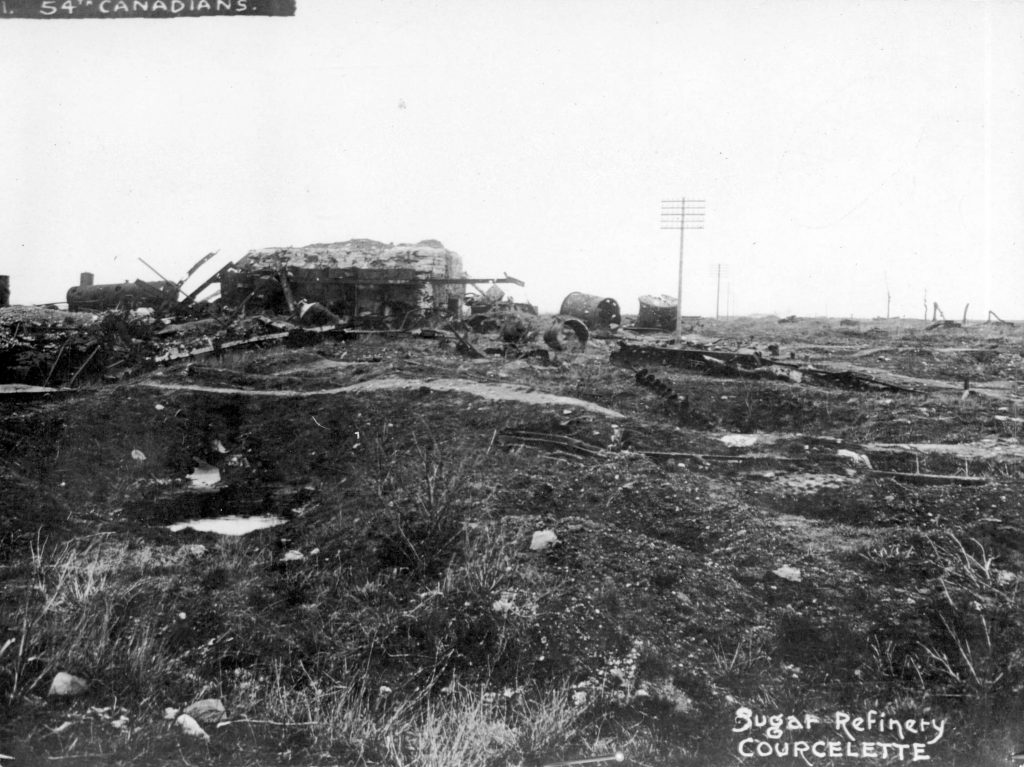 The 13 September order intended to recapture a sector of Pozières Ridge seized by the 2nd Battalion on 9 September. This attack took the last portion of the ridge held by the Germans, and they were eager to retake it. The Germans were the masters of counterattacks to recaptured lost ground and upset allied plans. There were two types of counterattacks, the immediate, the Gegenströß and the deliberate, the Gegenangriffe used if the Gegenströß had failed. In both cases, the Germans attacked from the flanks using bombers to envelop the attackers, often just using bombers. Gegenströß, often the most effective, relied on the battle sense off the front commanders to time committing reserves to strike without referring to their superiors. German formations at all levels started concentrating their most aggressive and resourceful men in special storm formations to make these counterattacks. The Gegenangriffe involved the assembly of reserves and planning for artillery support. Properly delivered with sufficient force it too could be successful, but in most cases they failed in the face of the British and Canadian guns and firepower superiority. Colonel Fritz v. Lossberg, the German defensive expert and chief of staff of the First Army, argued that a deliberate attack even if a partial failure was good for morale and cost no more men or munitions than waiting passively under the allied bombardment. A dubious assertion as it could also result in a bloody repulse that undermined trust between commanders and their troops.

The commander of the 45th Reserve Division––raised in the early months of the war––planned a Gegenangriffe attack that called for a platoon of storm troops and the 10/211 Reserve Infantry Regiment to retake the trench. Supporting the attack were the machine gun company of the 211th RIR and the 245th Trench Mortar Company. The heavy artillery was to start shelling in the early morning of 14 September, with the field guns opening at 11:00 am and to fire until 4:00 am on the 15th, at which it was to lift to 300 metres behind the objective and fire at an intense rate for three hours.[2] German artillery preparation triggered no warning or even awareness in the Canadian Corps Intelligence reports. The storm troops were to carry 8 stick and 8 to 10 egg grenades while the 10th Company troops only carried two grenades each. All were to have three days rations and water, indicating the planners expected difficulty in getting supplies to the recaptured position. The orders concluded with, “Throughout the Division, during and after the action, the highest combatant spirit must be kept up.”[3] 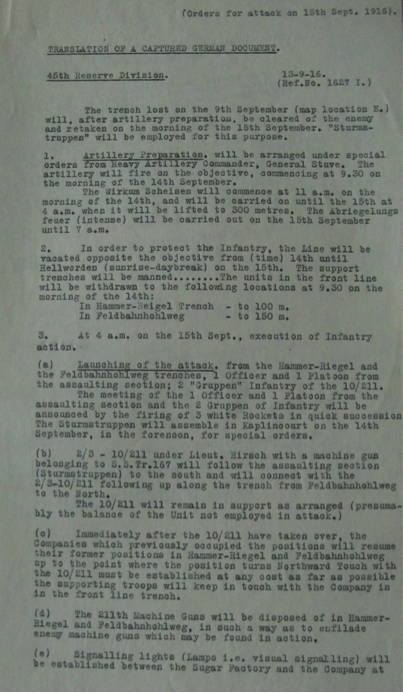 The German plan was comparable to Canadian ones in timing for the bombardment although it did not state the number of pieces or rate of fire. Three aspects of the plan standout compared to equivalent Canadian orders. First, the Germans’ concentration of men on the front was half of the 2nd Battalion’s attack. It committed three almost full-strength companies, while the Germans used one under-strength company and a storm troop platoon. The Germans were probably counting on their artillery and trench mortar support to crush the defenders. Second, the storm troops carried an astounding number of grenades compared to what Canadian attackers carried. The storm troops went into battle with 16 to 18 grenades whereas the typical load was two to four grenades for a Canadian attack. This large number of grenades indicates a recognition of the difficulty of resupply along with three days’ rations. German counterattacks later in the campaign wiped out Canadian lodgements in their trenches when the Canadians ran out of grenades, hence the need to carry so many. Finally, in the over 80 operations orders at the battalion, brigade, division, and corps level reviewed by the author for Canadian attacks on the Somme, there was only one instance similar to the exhortation to maintain combatant spirit.[4] This suggests the 45th Reserve Division was experiencing morale or discipline issues. Comments from Canadian officers in the after-action reports of Courcelette stated the defender’s morale was clearly shaken and, while the machine gun crews fought on with their customary stubborn courage, the infantry was less determined. 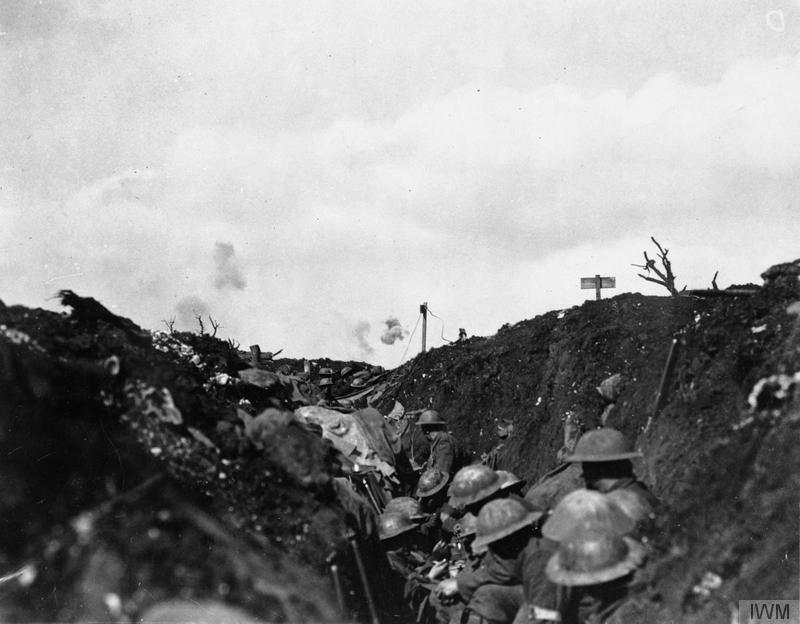 As the 20th and 18th Battalions were filing into their assault trenches at 3:00 am on 15 September for the Courcelette offensive, the German troops assaulted. The storm troops poured out of the German front line and entered the 20th Battalion’s trench on the front of one platoon.[5] Reliefs were a dangerous time to face an assault and especially so just before a major offensive, but the 20th Battalion’s bombers quickly evicted the intruders. The 18th Battalion repulsed the attackers before they reached their trench. A second attack a short while later was also defeated.Dr. William Stewart Somme Septerder on the Somme Septerember 1916ertleBattl eof The two battalion’s success shows how well-trained and effective were the formations to overcome the potential chaos and losses from the counter attack and assault on time and with success. As the division commander later characterised the counterattacks “this nearly upset the applecart and it was only the men’s determination and high spirits that saved the situation.”[6] The bombardment and barrage for the Courcelette offensive caught the German trenches heavily manned in anticipation of another attack and the Canadian artillery slaughtered the defenders. This greatly assisted the Canadian attack by the 18th and 20th Battalions. This failed attack provides evidence that Lossberg’s belief about the value of deliberate counterattacks was flawed, at least in this instance. 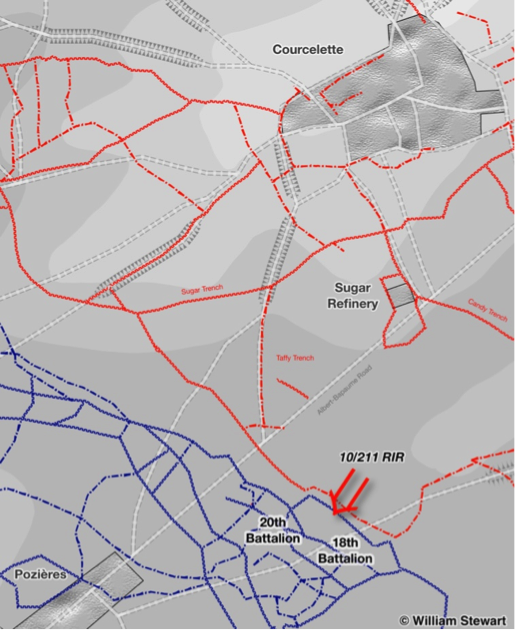 [1] The only exceptions are scattered records in the British and Canadian official histories, US Army duplicated records for the German formations they faced dating from the inter-war years, and approximately 36,000 pages of institutional documents of German Great General Staff, staffs and chiefs of troops, military units, the Prussian War Ministry, Ministry of Internal Affairs, Ministry of Foreign Affairs and others digitised by the Russian Federation. They are available at http://tsamo.germandocsinrussia.org/en/nodes/2-deutsche-beuteakten-zum-ersten-weltkrieg-im-zentralarchiv-des-verteidigungsministeriums-der-russischen-foderation-bestand-500-findbuch-12519

[2] German time was one hour ahead of British time, but it is unclear if the translator converted it.

[4] This was in the operations order by Major R.O. Alexander of the 24th Battalion for Battle of Ancre Heights on 1 October 1916. Included in the order was the entreaty that “A full determination to win is sure of success.” The battalion was exhausted by three days of heavy fighting, heavier losses, and sustained bombardment by Canadian artillery. War Diary, 24th Battalion, OO No. 3, 1 October 1916, RG9 III-D-3 v4932, LAC.

[5] Reports give the times ranging from 3:00 to 5:00 am, but the most likely time was 3:00 to correspond with the time ordered in the attack plan and what the 4th Brigade recorded.