Most Canadians with little knowledge of Allied efforts during the Second World War are somewhat familiar with the Operation Overlord landings at Normandy. The Allied invasion of German-occupied France on 6 June 1944 seems engrained in a collective psyche of remembrance as the lone ‘D-Day’. Yet we often forget that another successful amphibious assault occurred less than a year prior. On the night of 9-10 July 1943, Allied forces invaded Sicily and commenced a 38-day campaign to defeat and remove Italian and German forces that occupied the island at the base of the Mediterranean. Codenamed Operation Husky, the Sicilian Campaign was a training opportunity for the Allies in preparation for Overlord, and it is often remembered accordingly. But on Sicily occurred a tremendous human sacrifice that needs to escape the shadow of Normandy to be remembered on par with the collective Allied commitment of the Second World War. 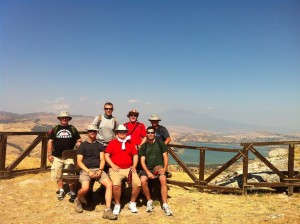 Historians Lee Windsor and Cindy Brown of the University of New Brunswick’s Gregg Centre for the Study of War and Society are among Canada’s top academics spearheading efforts to re-assert the Sicilian Campaign as a successful Allied operation. As part of their work they lead an annual study tour that takes participants on a guided exploration of Canadian and American battlefields through the island’s coastal, inland and mountainous landscapes. The tour provides participants a unique opportunity to engage physically, mentally and emotionally with the 1943 campaign on a level that is otherwise unattainable.

Having been fortunate to be sponsored by the Canadian Battlefields Foundation and the Laurier Centre for Military Strategic and Disarmament Studies, I took part in this year’s study tour, which was held in late July in conjunction with Operation Husky 2013 commemorative activities that marked the 70th Anniversary of the Allied landings on Sicily. I was one of fourteen participants from across Canada and the United States that made up the two-bus tour of teaching professionals, graduate students, military personnel, and others interested in learning about the Sicilian Campaign from a fresh perspective. 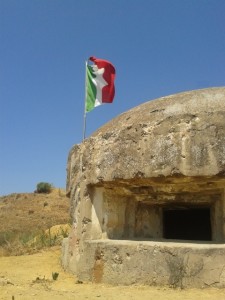 Italian pillbox in the Sicilian countryside

Over the course of ten days we actively toured battlefields from the Plain of Catania at the base of Mount Etna, first heading south along the eastern shore of Sicily to Syracusa. We spent two days at our first base exploring nearby battlefields, which included a stop at the 1st Canadian Division landing site at Pachino (Pah-Key-No) beach. From there we toured westward along the southern shore of the island to the American 7th Army landing zone in the Gulf of Gela, before turning north towards Sicily’s interior and the battlefields of Barrafranca, Piazza Armerina, and Valguarnera. Our second base was the mountain-top town of Enna in the heart of Sicily, which provides one of many excellent panoramic views from which to explore the terrain and delve into the strategic components of the Campaign in such a way that is only possible through a physical presence on location. From Enna we were in close driving distance to important stops at Assoro, Leonforte and Agira, all three of which were towns liberated by Canadian troops. Before the conclusion of our trip, we also made stops at the American-liberated town of Troina and at the Straits of Messina, where the Allies forced the German evacuation to mainland Italy. 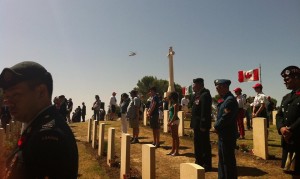 At each stop participants had the pleasure of listening to the enthusiastic teaching styles of Dr. Windsor and Dr. Brown, whose passion for Sicily challenged us to thoroughly engage with questions of a logistic and strategic nature in an attempt to better understand the battlefield circumstances that the Allies fought through. Windsor stands at odds with Carlo D’Este’s campaign interpretation, Bitter Victory. D’Este relies heavily on the postwar German assessment of the 38 days which, for reasons of propaganda, depict Axis success on Sicily. Windsor’s work in the field is focused on correcting the historical shortcomings of blotched interpretations such as D’Este’s, and he uses the tour as an opportunity to engage participants in a unique historiographical exercise. For her part, Brown uses the tour to spread her passion for the under told stories of civil-military relations and the Allied commitment to Sicily’s liberation prior to and following the Campaign. Having the opportunity to actively learn from two of Canada’s leading academics on Sicily, as well as from the tour’s other participants, is an educational experience without comparison. 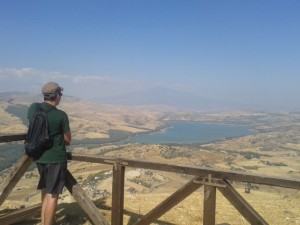 Matt Wiseman viewing the Canadian War Cemetery from atop Agira

Ultimately, no words or images will suffice to explain the atmosphere of Sicily in late July. To be on the beach at Pachino with a scorching sun beating down on your head, or at the southern base of Assorro gazing up at an awe-inspiring cliff side, or at the top of Agira looking down at the Canadian War Cemetery is the only way to attempt to understand the events of Sicily during the long 38 days in mid-summer, 1943. The feats achieved by the multinational Allied contingent, in the face of a harsh climate, terrible terrain and a well-trained and unyielding foe, are alive on the island.

The tour left me with a shocking sense of gratitude. I was inspired when I left but more importantly I came to the realization that the lessons of war stretch well beyond the pages of history. A full understanding of the past is inaccessible, yet my experience on Sicily allowed me to gain multiple perspectives to advance my overall understanding of the Second World War. For this I am indebted to all who made my trip possible, and I am perhaps more thankful for the sacrifices of the brave fallen than I ever had been before.

Matthew Wiseman is a PhD Candidate at Wilfrid Laurier University.