The Wabanosse Hearing: An Indigenous Veteran Fighting for a Great War Pension

The Wabanosse Hearing: An Indigenous Veteran Fighting for a Great War Pension

When Canadian veterans returned home from the Great War in 1918, two government programmes were available to them. The first was the vocational training programme, which was created to help ex-servicemen re-enter the job market on an equal footing with their non-veteran counterparts. The philosophy behind this system was to restore veterans to economic independence, so that they would return to their expected place as the male breadwinner and head of the household, and not become a financial liability on the state.

Many veterans who incurred more serious and permanent injuries as a result of their military service turned to the second government programme: the pension system. To qualify for a pension, veterans had to prove that their post-war injuries were attributable to some ailment they had suffered while on active duty. For example, a veteran whose leg had been amputated as a result of a shrapnel wound would receive an eighty per cent pension. On the other hand, another who had been diagnosed with neurasthenia or shell-shock in the 1920s, but had no proof on his service record that he had experienced symptoms of such diagnoses, might be denied. 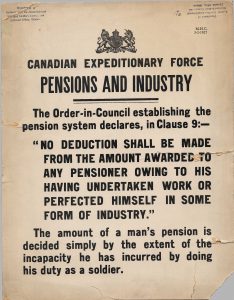 Pensions and Industry. Poster reassuring veterans that work will not affect their pension, on the condition that the disability is a result of injuries sustained during service. Canadian War Museum, Information Poster
CWM 19770066-001

According to historian Desmond Morton, this concept of “attributability” allowed the federal government to avoid the so-called “pension evil” that plagued the United States in administering pensions to its own veterans, which ballooned to a quarter-billion dollars by 1932.[1] However effective this concept might have been for reducing government spending on veterans, it was a rather unsympathetic and mechanical way of administering benefits to disabled ex-servicemen. In some cases, it allowed ruling committees to deny veterans a pension based on their racial makeup.

Such was the case for Private John Wabanosse, an Ojibwa man from Manitowaning, Ontario. Enlisting at the youthful age of twenty-two in 1915, he found himself fighting in two of the Canadian Expeditionary Force’s largest and most significant battles of the Great War: Vimy Ridge in April 1917 and Arras in the summer of 1918. At both engagements, Wabanosse was gassed, leaving him incapacitated for three months after Vimy, and another two weeks after Arras. When he was discharged, he attempted to return to his former occupation of logging in Canada, but found that the gas had weakened his respiratory system. When he exerted himself, he experienced severe chest pain and was forced to abandon his pre-war occupation. He took up farming instead. 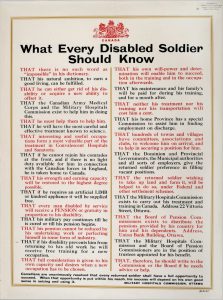 “What Every Soldier Should Know”. Wartime poster released by Military Hospital Commission informing veterans of their benefits and encouraging hard work as a means to overcome disability. Canadian War Museum, 19900076-847.

A few years later, Wabanosse married and had four children. Sadly, his ailing chest would not only affect him, but his family as well. Three children died almost immediately after birth, and the oldest died of what Wabanosse called “bronchial trouble.” A nurse later advised him that this respiratory illness had actually been contracted from his father. He had tuberculosis.

Wabanosse had been denied a pension upon returning home in July 1919. After he quit farming in 1929 due to continued chest pain, and was sent to the Christie Street Hospital in July 1930 as a tuberculosis patient, he decided to re-apply for a pension in September 1931. His application was eventually denied, and, as a result, that same month, Wabanosse was sitting in front of a tribunal, pleading for financial compensation he felt he deserved as a result of his military service.

Unfortunately for Wabanosse, the hearing did not rule in his favour. Although he “impressed the Tribunal favourably with his straightforward evidence; which [was] accepted as truthful,” a doctor specializing in respiratory illnesses, Dr. W.J. Dobbie, admitted that “Indian races [are] more susceptible to tuberculosis than other races.” Wabanosse never received a pension.

The Wabanosse hearing provides a glimpse into the implementation of Canada’s pension system. Although veterans could be denied a pension, they did have an opportunity to appeal that decision, and were often given a chance to send additional evidence of their injury being attributable to military service. Yet, it also demonstrates the more sinister aspect of the system. Although it was supposed to operate objectively, human beings are inherently subjective, and medical and societal attitudes towards Indigenous peoples, in some cases, were used to deny them their benefits. Incurable tuberculosis veteran patients were supposed to receive a one hundred per cent disability pension. Wabanosse received nothing because of his apparent racial predisposition to the disease. The government may have avoided the “pension evil,” but for veterans like Wabanosse, the system was far from fair.