by Kesia Kvill and Sandy Barron

“The shaping of a past worthy of public commemoration in the present is contested and involves a struggle for supremacy between advocates of various political ideas and sentiments.”

Monuments and memorials are not history. Rather, they are sites of commemoration and memory, often dedicated long after the death of the individual or event the builder seeks to remember. The choice of who or what is officially remembered, is not determined by all members of a community, but by a select group. Monuments, statues, and institutions of collective memory, like museums, have been carefully created by those who hold political or social power to send a message to other citizens about the social order and proper behaviour.[1]

It is helpful to think of statues and monuments not as representative of history, but as artefacts with their own history. When historians and curators read artefacts, they do so much in the same manner that they would with textual documents. It is important to consider who built the monument, when it was built, and for what reasons. Further, because monuments are constructed in public space, we need to consider how that location gives additional meaning to these artefacts. Statues, like all other artefacts, require context.

Public memory is not static, but evolves with societies and subcultures either in accordance or in opposition to dominant political and social values. The problem with many statues is that they remain the same, even as the culture around them changes. As statues are most often built by those with power, they act as expressions of power in a public space. They send messages about who belongs, who does not, and what values and actions are appropriate. Statues continue to stand as expressions of the values of the past and can become irrelevant and even threatening symbols of a time in which one group sought to justify their use of power to subjugate others. 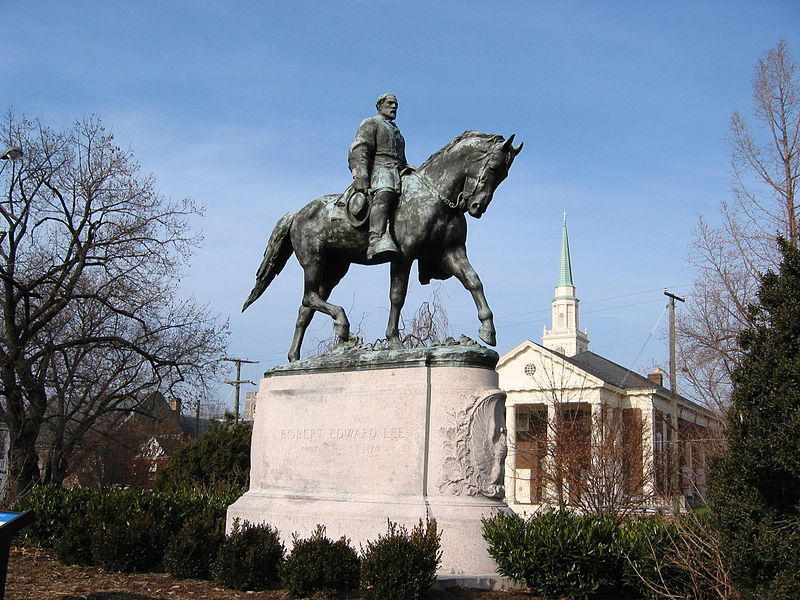 One of the principal difficulties experienced by those who wish to think through Confederate monuments beyond an initial gut-reaction to either “preserve history” or “tear them down” is the need to historicize these artefacts themselves. Most Southern Confederate statues were forged and dedicated during “Redemption,” – the violent reactionary end of Reconstruction, a Radical Republican attempt to ensure the feasibility of Black political life in the postbellum South – the Klan craze of the 1920s, or during the Civil Rights era of the mid-1950s to the mid-1960s. These statues are therefore interventions that reflect and celebrate political and racial inequities, and though Southern cities have been undergoing sweeping changes demographically and politically in the last two decades, they still encapsulate the history of the South for many. 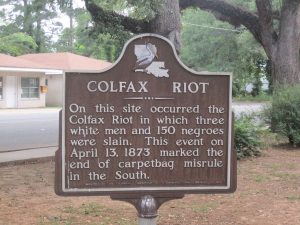 Outside of the town of Colfax, Louisiana – the county seat of Grant Parish, a contested county in the 1872 Election – sit two small monuments that exemplify these problems. In 1873, elected Radical Republicans set up at the Colfax Courthouse, defended by Republicans and Black members of the state militia. In April 1873, white Fusionist forces, representing conservative Democrats, Liberal Republicans, and various white supremacist militia groups, attacked and captured the courthouse, killing in battle or executing in surrender about 150 Black defenders. The Colfax Massacre shocked Radical Republicans in Congress, and despite a Federal investigation, it was largely forgotten in the reassertion of white political rule in the South after 1876. Milton Dunn, a white combatant on the Fusionist side, became the principal historian of the event in the early twentieth century, and dubbed it “The Colfax Riot,” a name that stripped Black and Radical Republican resistance of its political dimension.

“On this site,” reads the historical state placard, “occurred the Colfax Riot in which three white men and 150 negroes were slain. This event on April 13, 1873 marked the end of carpetbag misrule in the South.” This placard, erected in 1950 by the Louisiana government, encapsulates the mythology of Redemption, albeit in a more sublimated fashion than the grave marker of the three dead Fusionists. Their monument, erected by the community, has their names engraved, followed by “WHO FELL IN THE COLFAX RIOT FIGHTING FOR WHITE SUPREMACY APRIL 13, 1873.” Few Southern markers are as clear about Redemption as this dozen-foot obelisk raised by the community in celebration and mourning. Both monuments were raised with the consent and support of one section of the community of Grant Parish, and in at least one case, with public taxes.

Members of the public who see value in preserving the past and do not understand the current outrage against Confederate statues often fail to see this anger as not new, but old. This is hardly surprising, given long controversies over Civil War History teaching in Southern schools. Yet historians have documented postbellum white violence against Reconstruction with increased vigor since the 1980s. Historian LeeAnna Keith argues that after 1874 in Grant Parish, “Republicans of either race would be required to fend for themselves.”[2] The legacy of lynchings, political disenfranchisement and Election Day violence by white Democrats throughout the South after 1876 was also a legacy of the forced silence of individuals, the Black community, and the story of the Colfax Massacre. Historians can help people decide the fate of Confederate monuments based on a balanced attention to what these monuments have erased, as well as what they are. “History” is never one story, no more unified than the present. It is an informed construction that should seek to be as representative of public life as possible. That takes listening, dialogue, and the political and personal will to try to understand monuments as things in themselves with social meaning.

Kesia Kvill is a History PhD Student at the University of Guelph. Her dissertation project explores food control and kitchen management on the Canadian home front during the First World War and women’s interactions with and perceptions of government intervention. Kesia completed both her BA(Hons.) and her MA at the University of Calgary.

Sandy Barron is a Vanier Scholar and PhD student in the Department of History at Carleton University. His research concerns the history of deafness and Deaf communities in Western Canada and the federal-provincial politics of Deaf education from the 1880s to the 1930s.

[2] LeeAnna Keith, The Colfax Massacre: The Untold Story of Black Power, White Terror, and the Death of Reconstruction, (Oxford, 2008), 152.