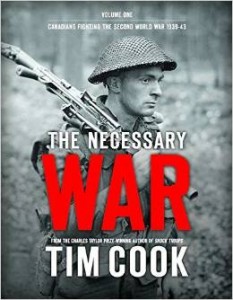 Tim Cook, a Member of the Order of Canada and longtime friend of LCMSDS, has been shortlisted for the 2015 John W. Dafoe Book Prize for his excellent book The Necessary War. We are thrilled to pass on this news and want to congratulate Tim on his remarkable achievements – way to go!

The winner will be named later in the spring and the award will be presented at the J.W. Dafoe Foundation’s Annual Book Prize Dinner in May.
The book prize memorializes John Wesley Dafoe, one of the most significant Canadian editors of the 20th century. It is one of the richest book awards for non-fiction excellence about Canada, Canadians and the Canadian nation in international affairs. In his tenure at the Manitoba Free Press, later renamed the Winnipeg Free Press, from 1901-1944, Dafoe was known for his advocacy of western development, free trade, and national independence. His case for adoption by Britain of the Statute of Westminster in 1931 advanced the severance of formal ties with Empire and created the eight dominions, which became the nucleus of the present 54-nation Commonwealth.
The Foundation’s activities also supports $10,000 in fellowships for MA students pursuing studies in international relations, politics, economics or history, at the University of Manitoba and a number of colloquia on Canada in international affairs.
Five submissions shortlisted for $10,000 John W. Dafoe Book Prize
Five books drawn from across Canada made the shortlist for the 2015 John W. Dafoe Book Prize from an excellent field of 47 entries.
Tim Cook, The Necessary War Vol 1: Canadians Fighting the Second World War 1939-1943. Penguin Canada.
Terry Gould, Worth Dying For: Canada’s Mission to Train Police in the World’s Failing States. Random House Canada.
David Halton, Dispatches From the Front: The Life of Matthew Halton, Canada’s Voice at War. McClelland & Stewart.
Chantal Hebert, The Morning After: The 1995 Quebec Referendum and the Day that Almost Was. Alfred A. Knopf Canada
S. Wright, Our Ice is Vanishing/Skiuvut Nunguliqtuq: A History of Inuit, Newcomers, and Climate Change. McGill-Queens University Press.

For more information about Tim’s accomplishments as well as his being named to the Order of Canada: