I recently participated in a tour of the Fort York battlefield and museum in Toronto, Ontario. Armed with my camera, my mission was to review the site for the Centre’s upcoming guidebook “1812: A Guide to the War and its Legacy.” The Centre’s guidebooks strive to promote informed memory by providing an understanding of what happened and why it happened that way, with the aim of directing tourists to do the same at these sites. Fort York achieves this through its hands-on and well-rounded learning experience, and I highly recommended visiting the site if you are interested about the War of 1812 and are living in or visiting the GTA. 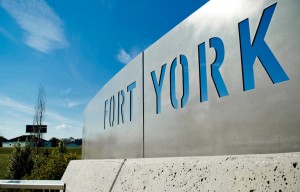 A National Historic Site, Fort York is home to Canada’s largest collection of original War of 1812 buildings. On 27 April 1813, the fort was attacked by American forces and the city occupied, pillaged, and then partially burned down. During the fray British commander Major-General Sir Roger Sheaffe retreated eastward and blew up the fort’s gunpowder magazine, causing heavy American casualties. The fort was completely rebuilt, purchased by the city of Toronto in 1909, and opened as a public museum in 1934. Since then, it has undergone different levels of restoration and today the fort remains with about half (eight) of the buildings that existed by the 1930’s.

Fort York is unique for its location near the heart of a major metropolis. Despite being surrounded on all sides by highrises and highways, the fort’s walls create enough of a barrier to immerse you in the historical moment of the War of 1812. The mere fact that the fortification stands today, despite the centuries of redevelopment in Toronto’s city core, is a testament to its value as a site of local history and of the greater legacy of the war as a whole. 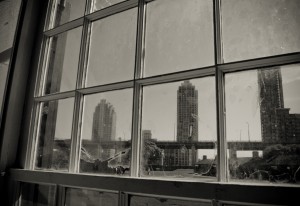 The guided tour, which runs about 45 minutes, is highly recommended and is usually conducted by a costumed volunteer. My tour was a special event, about 2 hours in length with option for extension at the end. A friendly and knowledgeable employee first escorted us through some of the original structures, and I was most intrigued by his insights regarding how the landscape has changed. 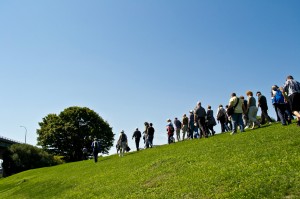 A look over the north wall down into the train tracks gives you a sense of the fort’s original 30-foot natural embankment, before the shoreline was extended to its current location about 1 km southward. The sunken area next to the blockhouse gives you an idea the original elevation of the ground inside. A diorama of Toronto circa 1817 located in the blockhouse is helpful for visualizing this drastic change in the geography of the region. 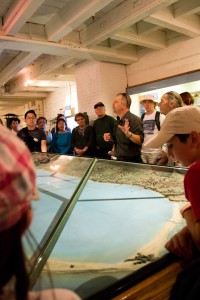 We then went through the Circular Battery and over the south wall, and sat on the grass as he detailed the American advance on York. As we moved to the western edge of the fort we were taken through a description of the battle, the exploding of the magazine, and the subsequent invasion of the town. The tour came full circle to the front of the fort and concluded with the aftermath and the legacy of the battle. (Click here for a map of the fort).

I was struck by how many people were there (about 60), most of whom who were actively listening and seemed genuinely interested in what the guide had to say. They posed questions, asked for clarification, and even struck up debates. About twenty stayed after the tour for an extra 30-minute presentation on the history of the site. I suppose I was a bit surprised to see such an enthusiastic and positive reaction to the bicentennial of the War of 1812 in downtown Toronto! 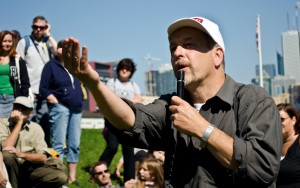 After the tour we were encouraged to explore the site on our own and actually go into five of the eight buildings. I did, and discovered that not only are the landscape and exterior of the fort impressive, but the gems contained within its walls – the authentic structures, archival displays, and hourly demonstrations  – combine to make the tour a tangible, educational, and real experience. 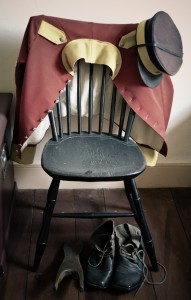 Exhibits inside the eight buildings effectively display a wide-range of artefacts and use multilingual panels to place them within their strategic, operational, tactical, and human context. 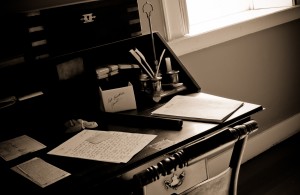 The Blue Barracks is especially interesting for its display of items, including clothing and dinnerware, found during excavation digs and restoration of the site.

In the Officer’s Mess and Quarters, rooms are staged to look as they did in their prime. 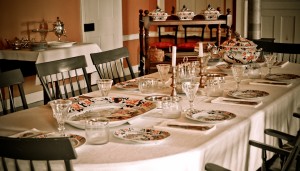 In the kitchen, costumed guides either prepare dishes made from period ingredients and methods, or leave samples for tasting. 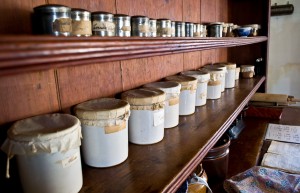 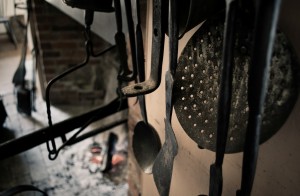 Every hour or so, the Fort York Guard puts on an impressive firing display using either firearms or cannons. 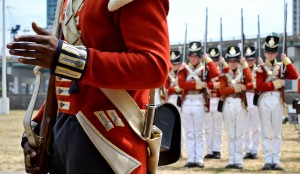 I would highly recommend Fort York as a site which offers an authentic experience in learning about and contextualizing the War of 1812 and the history of the Greater Toronto Area. Visit www.fortyork.ca to learn more! 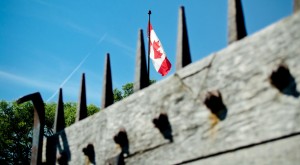 Caitlin McWilliams recently finished her Master’s degree in History at Wilfrid Laurier University, studying Canadian aviation history under the supervision of Dr. Roger Sarty. She will be contributing battlefield reviews and photographs to “1812: A Guide to the War and its Legacy.”