Vimy Day Feature: War and Memory in a Personal Context by Jesse MacLeod 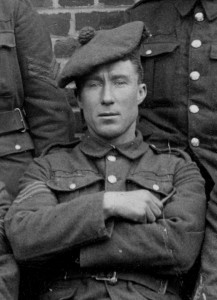 In September 2012 I was fortunate enough to have the rewarding experience of visiting the battlefields of the First World War in northern France. It was a trip I had planned throughout my final year of my undergraduate degree at WLU, and something I had wanted to do for many years. Though all battlefield tours and visits have meaning and value for those who embark on them, this one was special to me for a variety of reasons. Most important was that I was walking in the footsteps and visiting the grave of my great-grandfather, Sergeant John MacLeod of the 8th Battalion, Black Watch, 9th (Scottish) Division. The two-week trip was spent primarily in Arras, where I was on my own for the first week followed by a second with my father.

Sergeant MacLeod was a Boer War veteran who remained a reservist with the British Army and was thus called to duty in 1914 with the 1st Battalion Black Watch. John was wounded in the opening months of the war – no surviving documents provide conclusive evidence for more specifically where and when. He married in December following his recovery, and was promoted to Sergeant in early 1915 as his experience was needed to help build the newly formed Black Watch Battalions of Lord Kitchener’s New Armies. He found himself back in France for the Battle of the Somme in 1916, where he was wounded for a second time in the final stages of that offensive at the Butte de Warlencourt. Again, there are no existing records which describe the exact nature of his wounds in either 1914 or 1916, though a family portrait taken in December 1916 reveals some sort of bandage on his left arm under his tunic. But following a quick recovery, he rejoined his battalion in the months leading up to the Arras Offensive of April 1917 as the acting-Sergeant Major for ‘A’ Company. He was fatally wounded on the 9th of April and died officially on the 11th. His body was buried at the Aubigny-en-Artois Communal Cemetery Extension, a cemetery used by the 42nd Casualty Clearing Station for most of the war and the final resting grounds of over 3000 First World War soldiers, including 666 Canadians.

As far as my family knew, this was the first time anyone had been able to visit his grave, let alone the battlefields where he fought and died. Unfortunately, his wartime service record no longer exists. A thorough reading of the secondary sources, private family documents and the surviving Battalion/Brigade/Divisional war diaries, allowed me to piece together a rough picture of his life in the army. I was helped immensely in this regard by users of The Great War Forum, an online discussion forum, who do this kind of work professionally. Combining this with a study of battlefield and trench maps I determined with a large degree of certainty where he would have been when he was wounded on the 9th of April. It turns out it was at the deep rail-cutting at the Blue Line, the second objective of the day for the 9th Division, and the concluding portion of the battle for the 8th Black Watch before they were ‘leap-frogged’ by the 10th Argyle & Sutherland Highlanders who carried on the advance. He was the unlucky victim of a German sniper during the consolidation phase of their newly taken territory which was a temporary salient, as the neighbouring Battalions struggled to take their Blue Line objectives on time. This same rail-cutting is still in use, and it is flanked on both sides by small cornfields which have prevented the area from succumbing to the same suburban development that dominates so much of the former Arras battlefields. 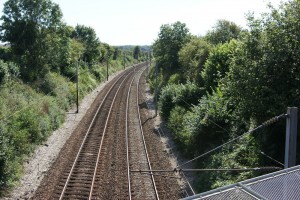 There is a road that runs through the village of St. Laurent-Blangy (one of the major suburbs of Arras) which roughly follows the line of advance for the Black Watch and Seaforth Highlanders of the 9th Division on the 9th of April. Walking along the road was an experience which provoked mixed emotions for me, but primarily that of disappointment as it is rather difficult to picture the trenches and stretches of no-mans-land that once dominated the area. Fortunately all of this stops when you reach a roundabout at the bottom of a steep hill that leads to the railway. The rail-cutting ended up being a fantastic site for any battlefield tourist, as it is rather off the beaten path, largely void of any other people, and there are plenty of war relics laying around. I have been told that the embankments on either side of the Arras-Lens rail cutting, much to the irritation of French railway workers, are a favourite dumping ground for unexploded ordnance found by local farmers. Fortunately, all the shells I came across had their noses cut off, which includes the fuse which would set off the explosive.

I visited numerous other battlefields on my trip around Arras and the Somme, but naturally the one which held the most significance for me was the rail-cutting at the Blue Line. The rather poignant knowledge that this was where my great-grandfather made the ultimate sacrifice was never lost on me, even while I enthusiastically uncovered old bullets, barbed-wire posts, shrapnel and shell fragments. I revisited the area numerous times and was able to provide what I felt was a good tour for my father, who appreciated seeing where his grandfather would have been during the war. We even found the well-preserved remains of a concrete bunker in the rail-cutting, which, thankfully, provided excellent cover from an oncoming high-speed train that threatened to triple the MacLeod casualty-count for the area – I suppose I can thank German efficiency for that! 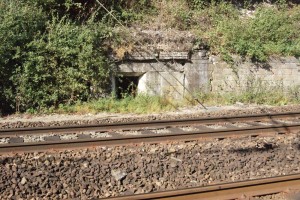 Just beyond the rail-cutting, near the village of Athies, is the monument to the 9th (Scottish) Division on the Point-du-Jour. It is a towering figure made of large stones imported from the Scottish Highlands and is well-worth a visit. There are also separate stones with the names of each battalion of the 9th Division lining the boundary of space provided for the monument. One of my few interactions with the locals occurred here when a farmer drove by slowly just to see what my father and I were up to. He was pleased to see that we were just visiting the impressive monument which otherwise seems like a lonely place. I was given the impression that the farmer rarely saw visitors to the sites of interest around his land, which also include numerous Commonwealth War Grave cemeteries. Despite this, the entire memorial was moved in 2006 from its original location between two busy highways. This was done so that it would be easier for the public to access. The effort was well worth it and it serves as a testament to the dedication of the Commonwealth War Graves Commission, who financed and organized the difficult task of moving each heavy stone and rebuilding the monument piece-by-piece. 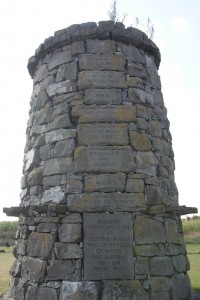 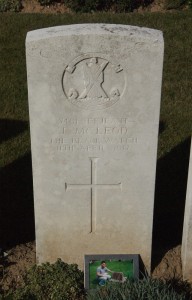 The loneliness of these places always compelled me to sign the guestbook at each of these cemeteries, and it was a great disappointment to find that the guestbook at the Aubigny-en-Artois cemetery was missing. Nevertheless the experience of seeing my great-grandfather’s grave was definitely worthwhile and I am quite glad that I was able to do so. I decided before I left that I wanted to leave a memento at his grave; something more than just flowers. So I brought along a laminated and framed photo of myself with the grave of his wife, my great-grandmother Henrietta, who had immigrated with my 5-year-old grandfather after the war to Ontario due to a lack of job prospects as a widow in Scotland. I thought this was a meaningful reference to the fact that his untimely death ultimately led to my existence, as it was in Ontario where my grandfather and grandmother met. Such is the contingency and unpredictability of history.