Veteran Bob Ross searches for the grave of Curley Christian, the only quadruple amputee to survive WWI.  On 9 April 1917, while serving with the Winnipeg Grenadiers during the battle of Vimy Ridge, Christian’s limbs were destroyed by a shell.  After the war, Christian was instrumental in establishing Canada’s Attendance Allowance program for veterans.

A vigil, organized by The Legacy Voices Project and Whos Who in Black Canada, was held in Toronto, Ontario for Curley on 9 April, 2012 during the Vimy Ridge 95th Anniversary commemoration week. 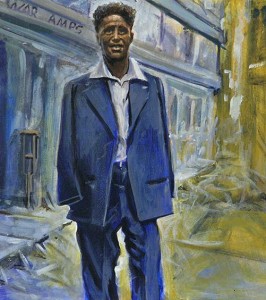 Curley Christian’s full military file has been digitized and can be viewed online at the Library and Archives website here. A summary of his service can be found at the Canadian Great War Project’s website here.

Sharon Williams, a cousin of Curley Christian’s who resides in Hartford, Connecticut, recently posted on a Veteran’s Affairs Canada forum recalling fond memories of her relationship with Curley, noting his zest for life and will to recover for his injuries. Her extensive comment can be viewed here.

Cliff Chadderton, a veteran of the Second World War and CEO of the War Amps of Canada,  featured Curley in a 2008 blog entry detailing his life, service, and post-war recovery.

Curley’s likeness is depicted on the Military Museums Mural of Honour as Panel Number 240, seen above. The description can be viewed here.