Wednesday Video: Jacques Vico and the Memorial at the Abbaye d’Ardenne

“On the night of June 7/8, 1944, 18 Canadian soldiers were murdered in this garden while being held here as prisoners of war. Two more prisoners died here or nearby on June 17. They are dead but not forgotten.” –  Inscription on the memorial’s bronze tablet.

In the lush garden of the Abbaye d’Ardenne, soft beams of sunlight stream through trees adorned with poppies and come to rest on a modest but compelling stone monument. This memorial, crafted from stone recovered from the Abbaye itself, commemorates the Canadian prisoners of war killed on 7-8 June 1944 by members of the 12th SS Panzer Division, led by Brigadeführer Kurt Meyer (25th Panzer Grenadier Regiment). Their remains were discovered soon after by members of the Vico family, longtime residents of the Abbaye.

Jacques Vico, the eldest son residing at the Abbaye, was instrumental in uncovering the physical evidence of the atrocities. Throughout his life he was extremely active in ensuring these brutal actions would always be remembered. In 1984, he worked with two enthusiastic men to design, construct, and unveil the monument which resides in the Abbaye garden today.  Mr. Vico recently passed away at the age of 89.

In this video, Mr. Vico stands next to the monument and speaks (in French) to students of Greenwood College in Toronto, Ontario. He discusses how decisions were made regarding the placement and construction of the stone memorial, and elaborates on the tablet inscription.

Veterans Affairs Canada offers some additional insight into the creation of the memorial: 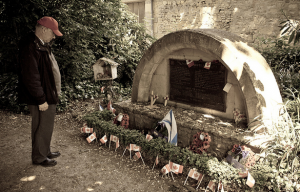 Desmon Morton takes a moment to pay his respects in front of the memorial during the 2010 Cleghorn Battlefield Study Tour [Photo: Nick Lachance]

“Major (later Colonel) Ian J. Campbell of the Canadian Army was serving in Europe and visited the site in 1980 with members of the Vico family and with Dr. R.L. Bennett, Professor Emeritus at the University of Caen, a Canadian expatriate originally from Winnipeg […] Noting that there was no tourist literature about the men who had fallen there or the circumstances around the event, Major Campbell undertook to do some research and prepare a small pamphlet, and also to try to arrange for a bronze plaque to mark the historic site. Working with Dr. Bennett and M. Jacques Vico, they decided that a monument might be built using some original stones from the Abbaye recovered and discarded during recent archaeological work at the site so that the monument would be consistent in style with the architecture of the Abbaye. It was proposed to build it on the Vico property right in the park where the murders had taken place. In 1984, Colonel Campbell had a bronze memorial tablet cast in Vancouver and delivered to France for mounting on the monument built by master craftsmen Leon Garnier and Jean Mesnil. Costs were defrayed by donations from Veterans, serving members, relatives and supporters of the project. The monument was unveiled on the Fortieth Anniversary of D-Day, 6 June 1984, by The Hon W. Bennett-Campbell, Minister of Veterans Affairs.”