‘When you walk the sands of Juno, they walk with you’ – Reflections on the 2013 CBF Tour by Katie Domansky

The beautiful beach that lines the small coastal town of Courseulles-sur-Mer in northern France is today a picturesque holiday destination for visitors from around the world. Its soft sand and lovely view evoke a sense of calm and memories of warm summer days spent idle in the sun. It appears to be a beach like any of the others that grace the shores of the English Channel – but it is not. This beach is part of Juno, one of five sectors of the Allied invasion of German-occupied France during the Second World War. On 6 June 1944, Canadian soldiers came ashore here to fight and, for many, to give their lives for our freedom. This beach is hallowed ground for all Canadians and remains a constant reminder of the sacrifices made during one of the greatest conflicts in human history.

Knowing what was freely given by the volunteers who stormed Juno’s shores so long ago, it is impossible to walk this ground as a Canadian and not feel humbled. Regardless of how many history books you’ve read, stories you’ve heard, or veterans you’ve had the honour to meet, walking the sands of Juno Beach will teach you more about Canada’s military heritage than can ever be fully understood through research alone.

It is for this reason that the Canadian Battlefields Foundation (CBF) sponsors twelve university students from across Canada, every year, to study in Europe. These students visit the actual battlefields of the First and Second World Wars and learn what other Canadians and Allied soldiers have contributed to their freedom. It is an experience that allows students to live the important military history of a nation whose military heritage is, sadly, too often neglected.

I consider myself tremendously lucky to have been granted a spot on this year’s CBF study tour. Alongside eleven other exceptional students from across Canada, I spent over two weeks in France and Belgium visiting the battlefields, memorials, and cemeteries of both the First and Second World Wars. We traversed farmers’ fields to follow the Canadian Expeditionary Force through the Ypres Salient, the Somme, and over Vimy Ridge. Literally walking in the footsteps of the fallen, we traced their journeys across windswept fields, through overgrown trenches, and atop hills they once thought impossible to climb. We trailed the Canadian soldiers of the Second World War over the ill-fated beaches of Puys, Dieppe, and Pourville, before entering Normandy and following the Canadian advance inland from Juno. Along the way we paid homage to other Allied fallen, visiting memorials and monuments that stagger the imagination – some whose size and grandeur are only eclipsed by the sheer number of names that adorn their walls, others whose simplicity speaks more of loss and remembrance than words alone ever could. Equally important were our visits to German cemeteries – one from each of the World Wars – that also educed incredibly emotional responses, some expected, others a surprise.

Our visits to all of the cemeteries had an especially profound impact upon our entire group. Row upon row of grave markers dot the landscape in this part of the world, reflecting words of love from family and friends or acknowledging the service of someone whose name we’ll never know. Many of our strongest reactions to this entire experience were felt in these cemeteries, regardless of the nationality of the soldiers buried there. Plenty of tears were shed, but I also think that our intense grief was at least matched in part by a sense of pride – in the individuals who gave their lives to serve their respective countries, and also in the communities that these individuals formed and those subsequently preserved by their actions. Walking among these graves really brought home the fact that remembrance is about more than just recognizing those connected to us through family, friends, or patriotism. We are all a part of a larger human community, one in which sacrifice is both mourned and celebrated in equal measure, regardless of which side you take up arms for.

The last two days of our journey were spent in six different ceremonies commemorating the sixty-ninth anniversary of D-Day and subsequent push to gain a foothold in France. We had the honour of participating in these ceremonies, laying wreaths at a number of different memorials and meeting those veterans who are still with us and able to make the long return journey to those distant shores. To have an opportunity to shake the hand of these veterans, to speak with them, was a humbling experience for us all. I will never be able to adequately describe what it was like to stand on Juno Beach, on the anniversary of D-Day, beside veterans who were responsible for storming its shores sixty-nine years ago.

I know our CBF cohort was further humbled by the fact that we shared this experience with another Canadian veteran, of a more recent war, but a Canadian hero none-the-less. Our tour-mate Bruce Moncur served with the Canadian Forces on two tours in Afghanistan, returning from the last severely wounded. Alongside our veterans who stormed the beaches in Normandy, Bruce was honoured in a speech given by former CDS General Rick Hillier at this year’s Juno Beach anniversary ceremony. This speech reminded all in attendance that we must continue to remember and celebrate our veterans – those who fought for our freedom in the World Wars, but also those who have made and continue to make sacrifices in conflicts around the world. Remembrance should not end with the last total war. And it should not be overlooked or impeded because of personal political views regarding the validity of any one conflict.

In his definitive account of Canada’s efforts during the Second World War, C.P. Stacey labeled Canada “an unmilitary community. Warlike her people have often been forced to be; military they have never been.” These words reflect a consistent – even growing – trend within a Canadian national consciousness that is increasingly comfortable with the view of Canada as peacekeeper alone. However, even a cursory examination of Canada’s history suggests that our military heritage is much more comprehensive, pervasive, and permanent than most admit. From our origins prior to Confederation through to our more recent forays in multiple peace operations, Afghanistan, and Libya, Canadian citizens and soldiers have rallied with force to fight for our homes, our allies, our values, and our way of life. A military spirit – perhaps uniquely Canadian, but military none-the-less – has helped to define this country. It is something that should be remembered.

The CBF student study tour represents a living memorial to the sacrifices made by Canadians in both World Wars and plays an invaluable role in Canada’s remembrance tradition. Allowing students to walk the same fields and beaches as our fallen soldiers and to engage with the human legacy of these conflicts, grants an unrivaled understanding of the true importance of Canada’s military history. 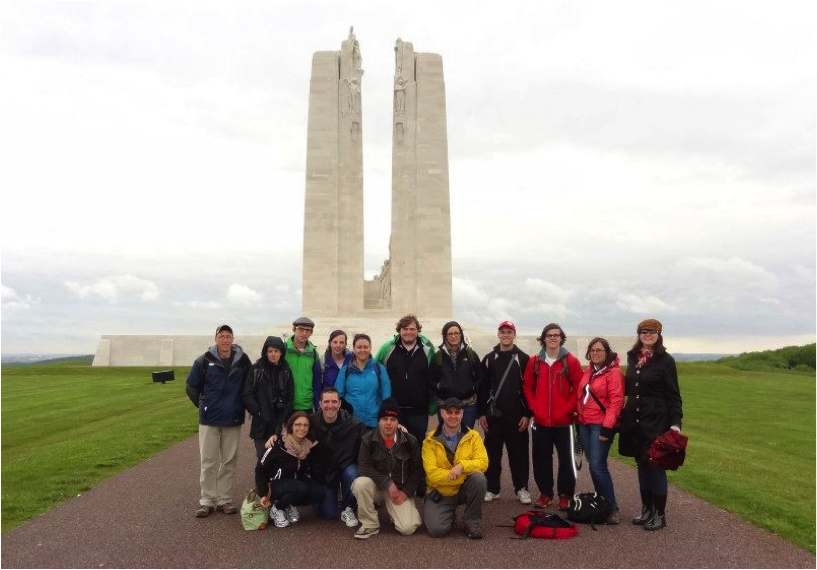 Katie Domansky is a doctoral candidate at the Centre for Military and Strategic Studies, University of Calgary.